The predominant style of the 1970’s can be summed up in one word – Disco! With mirror balls, Farrah flicks, flared pants and lit dance floors, the style of the disco is full of fun.

Backdrop Fantastic Australia offers a range of disco backdrops to make your 1970’s event or production as groovy as can be. The disco scene of the 70’s saw funky sounds, falsetto vocals, neon lighting, glitter, and mirrors launch the world into an almost futuristic wonderland. With bursts of bold colour, light-up dance floors and icons of the disco age our Disco 1, Disco 1B, Disco 2, Disco 3 and Disco 4 backdrops will perfectly set the scene for your disco function.

Keeping this iconic disco style our Disco Evolution 1, Disco Evolution 2 and Disco Evolution 3 series follows disco through the ages as it incorporates even more celebrities and a modern ‘retro’ style. See Abba, Michael Jackson and others carving up the floor with distinctive disco poses.

Here at Backdrops fantastic Australia we have captured the essence of the decade in our outrageously fly range 1970’s and Disco backdrops. Moving away from the dance floor, the distinctive colouring of the neon lights illuminating the strip of South Beach Miami promise to provide a retro yet modern vibe, perfect to set the scene for your 70’s party or stage production.

Backdrops Fantastic Australia’s range of 1970’s Disco Backdrops perfectly captures the fashions and feel of 1970’s. Your guests are sure to dig it!

Backdrops Fantastic Australia has an extensive collection of dazzling backdrops for your next event or production. Our office is located in Burleigh Heads, Queensland. We distribute all around Australia and New Zealand. For additional inquiries please contact one of our friendly consultants by calling 07 5520 2311 or leave a message through our contact page. 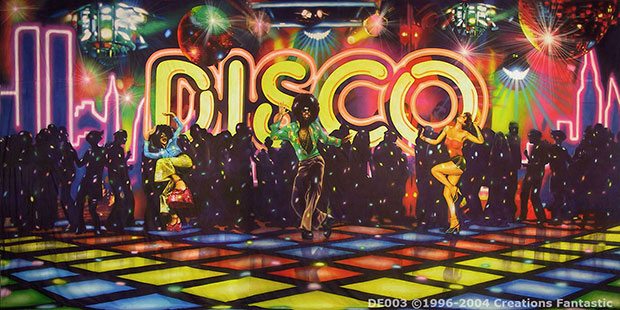